A non-fiction book written by Ron S. Filion. The book includes "[t]he true tales of a Victorian aristocratic couple, one a millionaire's daughter and the other a Hungarian count, sailing their yacht for adventure on the Pacific and Indian Oceans. The couple, Eila Haggin and Rudolph Festetics de Tolna, met in Paris in the early 1890s. They married in 1892 in New York, and began their adventure in 1893 aboard their luxury yacht, the Tolna, a gift from Eila's parents. They sailed from San Francisco to Australia, up to Japan and back down to Singapore, and westwards to the Indian Ocean, stopping at many known and unknown islands along the way. In their travels, they encountered cannibals, Pacific Islanders, Germans, British, and Americans - some of these groups more dangerous than others. They also visited Robert Louis Stevenson and tried to enter Manila at the beginning of the Spanish-American war. The fascinating exploits of this couple were followed by the newspapers in the Pacific and the United States. This book contains transcriptions of the many sensationalist articles, along with excerpts from Eila's diaries, and translations of Rudolph's books about their five year journey." 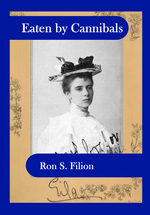